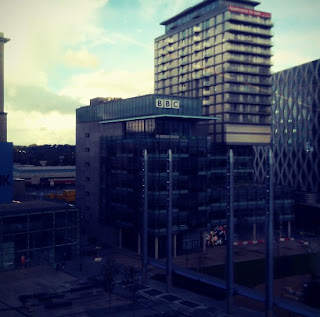 A few weeks back I visited the BBC Quay House at MediaCityUK in Salford to attend the BarCamp un-conference. The website describes the event as, ‘a group of enthusiastic people gathering to share their knowledge about technology and anything else they are interested in.’ The talks were very varied and included discussions on 'how to rob a bank', song writing and being happy, but the majority of the talks orientated around technology and web development. I was a little disappointed that there wasn't more sessions on social media or blogging, though arguably I could have organised my own talk, but I am no authority on the subjects and would have been intimated by the vastly more knowledgable academics that were present. This included the very friendly Helen Keegan, a lecturer from the department of Media at Salford University, which is now based in MediaCity. She presented the only talk that day which did cover social media platforms, discussing digital communication through visuals and how image networking websites can provide a bridge of communication between other cultures. The main areas she discussed were instagram; an iPhone photo sharing application and networking website, emoticon; the symbol based font, and also flickr; the image sharing social networking website. In the session she explained that she had gained more followers from Asia using instagram then any other photo sharing or networking website. The images she took using the application were mainly of food and seemed to connect with this culture more then the previous photographs she had uploaded, and had therefore connected her to a new audience. The session was very insightful and generated a discussion on the different realms of image sharing including the darker side of flickr such as users who collect niche fetish images, one example being photographs of women wearing scarves. 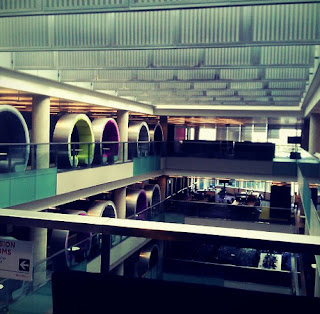 Each session lasted around 20 minutes, so it was difficult to go into too much depth on the subjects presented, which was sometimes disappointing. The event was run by attentees and the time was adequate enough for some presenters to mainly plug their businesses, these were the less enjoyable sessions but an enviable factor when a free platform is available such as this. Overall I really enjoyed the whole experience and particularly enjoyed seeing MediaCity for the first time. I hope that this event is one of many to take place at MediaCity as I am very excited to see how the area develops in the future and would like to have a excuse to visit again.
Posted by Jennifer at 09:05