Night at The Museum

There are two main reasons I love Twitter, 1. I get to read funny tweets, which lighten up my bus journey to and from work, 2. I find out about exciting events happening in Manchester via my Twitter feed. Last month's found event on Twitter took place at Manchester Museum after closing hours, and involved lots of mini creative workshops and an exhibition, 'We are extInked,’ which combined art and ecology. The exhibition steamed from a previous project called ‘extInked.’ ExtInked involved 100 volunteers who each had an original drawing of an endangered species tattooed onto their bodies. I knew two of the volunteers who took part in the project and who are now ambassadors for their chosen tattooed creatures. While at the event I took part in one of the activities that required me and my companion to choose three objects from a table that we felt would create an interesting composition, these objects included museum artefacts and items from the museum shop. The objects were then handed to a photographer who we worked with to help bring the objects together and produce an interesting image/narrative. We were told that the photograph would be used for a future display at the museum, I hope this is true! 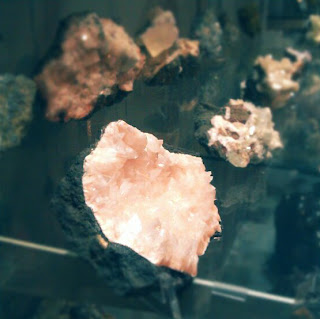 I also created a self portrait print that incorporated the encased butterfly display, using a pencil and piece of square foam. This workshop made me feel like a kid on a school trip to the museum, and as I recall there were many trips to Manchester Museum during my school years. I have also previously worked at the museum as a volunteer as part of the ‘Family Friendly Film Festival,’ assisting with the creative workshops. I enjoyed the fact that on this occasion the event was for adults only and I hope they'll continue to bring new exhibitions and evenings such as this to the museum for us excitable adults who also enjoy making things and looking at dinosaur skeletons, but with a bottle of beer in ours hands, of course. I will keep my twitter eyes peeled as I heard this event is the first of many!
Posted by Jennifer at 13:10